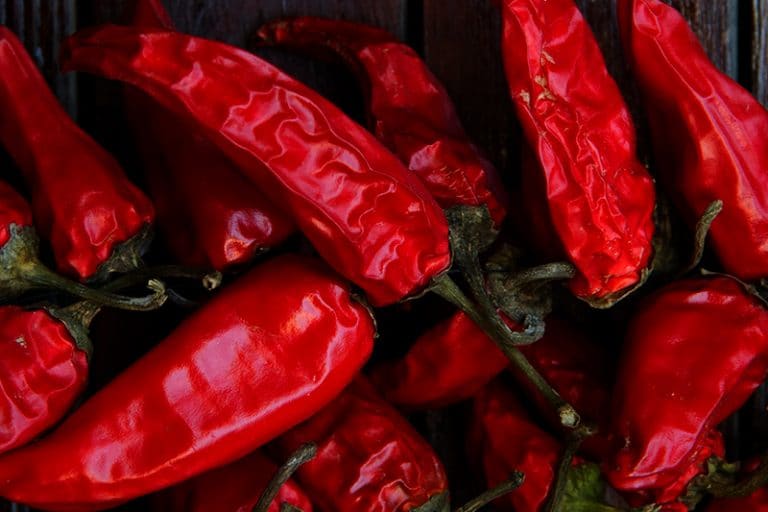 Chiles are what give various Mexican food their zest and add important undertones to the cuisine.

One of the most famous chiles used in Mexican cooking, poblanos are generally larger in size, averaging 4 to 6 inches in length, and usually a deep green color. Poblanos are often used for chiles rellenos both for their size and thicker flesh. Rajas are poblanos that have been roasted, peeled, and sliced into strips.

When a fully ripe poblano has been sun-dried, it becomes an ancho. These are generally not spicy, though occasionally you will find one in the bunch that has some heat. Ancho’s are generally a dark brown color and because they are widely available and inexpensive, they are frequently part of many traditional Mexican food recipes.

One of the most widely known and popular chiles used in Mexican cooking is the jalapeño. They are bright with a slightly grassy flavor and are just playfully spicy enough that most people can enjoy them.

The colors of the jalapeño range from a bright green to a sassy red and they are generally around three inches long. The green, often unripe, version can be eaten fresh or pickled on all types of Mexican food while the ripe red ones are surprisingly sweet and less spicy.

However, you choose to eat a jalapeño, smoked, dried, pickled, fresh, or as part of a dish, they are delicious which is one of the reasons for their popularity.

While many dried chiles are sun-dried, jalapeños have a higher water content than the average pepper. A jalapeño dried in the sun will often rot before it dries due to the amount of water it contains. Smoking the jalapeño turns up the heat enough to dry the pepper and alters the flavor in a delicious way.

These small green chiles used in Mexican cooking look like miniature jalapeños but contain much more spice. Often the seeds and veins are not removed, causing the spice level to remain quite hot. Jalapeños and serrano’s are interchangeable in undertones and flavor, but not in terms of their Scoville rating.

Another common chili in Mexican cuisine is the guajillo. These chiles are very similar to ancho: bright red and usually dried. Guajillo’s in the U.S. are generally not as spicy as the ones found in Mexico; however, all guajilloes have a generally mild flavor with a hint of berry-like sweetness. Guajillo’s are also used for many salsas and can bulk up the flavor in a dish with other chiles. Such smooth, saucy, salsas are great to use for enchiladas and chilaquiles.

Fresh Arbols can be difficult to find in some parts of the States. Usually what is available are the dried Árbols, or a powdered version of them. These chiles are particularly spicy and so are frequently found in salsas particularly those which are akin to a hot sauce.

When choosing an árbol, look for bright red skin. When they turn brown, the chili is aging and its flavor can be substantially dulled.

These chiles have a flavor much like a bell pepper, but without a hint of that sweetness. Determining the flavor can be difficult because of their spice level, but seeding, toasting, and soaking will help tone the spice down. Nothing will remove the spice entirely, so if you’re looking for mile, choose a different chili.

Some of the hottest chiles used in Mexican cooking are habaneros. These roundish, plump chiles offer more tropical, fruity, and sometimes herbal notes than most chiles.

These chiles are larger, five to six inches long, and the name indicates they are a dried chilaca chili. They are usually moderately spicy, keeping in mind that you might find one that well exceeds moderation. They have a meaty and rich flavor that makes them good companions to carne (meat) and mushrooms.

Hopefully, this brief overview of some of the more famous chiles used in Mexican cooking will help you navigate some of the wealth of chiles you might come across and even some of the chiles we use in our cuisine here at El Chubby’s Fresh Mexican Grill in Aurora. Come visit us soon for a taste of Mexico. Carne Asada fries to breakfast burritos, we’ll spice up your day!